How To Play Guide For Mechanic Miner

This page will serve as a basic how to play guide for Mechanic Miner. While there is very little information available at this time, we urge you to check back often, as new information is being added all the time! Feel free to edit this guide with any tips, tricks, and suggestions.

So I have the game running, now what?[edit | edit source]

This guide is also for you who downloaded Mechanic Miner, had a look at the menu, or maybe even tried to explore the world a bit, and then went to look up what to do next. Fear not, friend! We're here to help you become a veteran miner in no time. Read on to find out how to configure settings, start a new game, explore, get stuff, build stuff, and survive your first few night in the game. 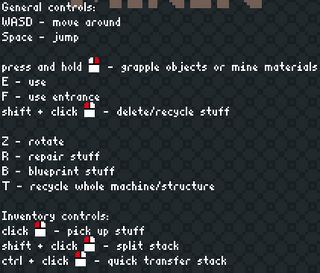 A list of basic controls, accessible from the Menu.

If you click on Controls in the Menu, you'll see an overview of the most basic controls in Mechanic Miner. You might want to have a look now, but you can always look at it again while playing by pressing Esc and Controls. If you forget how to do anything, check there before looking it up in a guide.

In order to move, you need to press keys on your keyboard and use your mouse. If you don't have a keyboard or a computer mouse… I have no idea how you managed to get this game to run on a PC. Well done. Have a cookie. 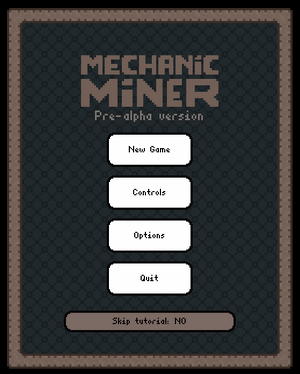 Before starting a new game, you're presented with some options. Select game mode, difficulty, singleplayer or multiplayer, and whether or not to skip the tutorial. As you can see below, we recommend that first-time players stick to the standard settings - but if you're in doubt, follow these instructions. 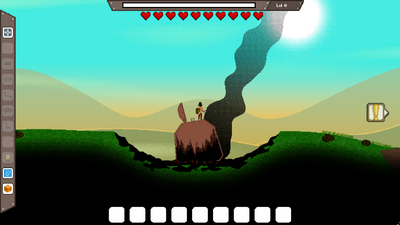 The start of the game, right after you crash into the ground with an escape pod.

You've now arrived with what appears to be an escape pod, and have probably started to look around, wondering what to do (you move by pressing A for left, D for right, and spacebar in order to jump). Standing on a strange new planet, the most obvious course of action occurs to you - take some stuff! Just stand next to some of those rock-like things, and zap them with your Multitool (move curser to object, right click, hold button for a few seconds).

Ok, ok, so now you have some stuff. It's in your inventory, which you can see in the bottom of your screen. Now, what to do with it? Your most immediate resources include Water, Copper and Peat. Nevermind how all that fits in your backpack. Actually, don't think about that bag too much.

Let's get you out there, so you can ravage the earth, build weird contraptions, and get killed repeatedly by harmless-looking critters. Most importantly, you'll want to get more stuff.

Read on for a guide on Mechanic Miner's basics, and remember that we won't go over everything. With any luck, however, this'll get you through the first couple of days after arriving. At which point you'll be ready to build some of those really cool machines, and maybe find out why this place looks so abandoned.

Let's start over from the beginning. 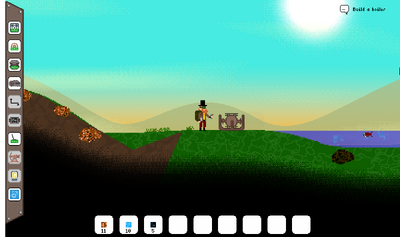 Inventory in the bottom, Crafting Bar to the left.

Here you'll learn about the different things on your screen - including your health, your inventory, the day-night cycle, and the first resources you'll be able to find. Note the Sun's placement in the sky, indicating that nightfall is nearing. The environment will change as you progress through the game, and the passing of time will affect that as well.

To the left on your screen is an overview of all the parts you can build in the game. This is your crafting bar. Everything you can craft is organized into these 11 boxes. The top 9 boxes show categories of items, the 10th box from the top shows Blueprints (containing models for machines you've previously saved) and the 11th box from the top (the bottom box in the row) shows Tech you'll later be able to unlock.

Right now, all the boxes are grayed out. They'll fill in with colors once you've gathered enough materials necessary for building stuff.

In the bottom of your screen you see your Inventory. This is a row of 9 boxes making up all the space in your backpack. Each box fits one category of thing - you can hold up to 99 of each item in your Inventory. Don't ask how that's possible. Hammerspace, you know?

Experience Bar at the top, Health Bar right below.

At the top of your screen there's a number of hearts

The 10 hearts displayed make up your Health Bar, meaning the number of times you can take bits of damage before your miner dies, at which point you'll have to start over from an earlier point in the game. The game is saved automatically at certain points, so you won't have to worry too much about that.

Some enemies are quite ruthless, and will gulp down most of your Health in one solid bite. You need to keep those hearts filled in order to stay alive and keep exploring.

The grey bar above the hearts is your Experience Points bar. The bar will fill up as you mine materials and defeat enemies, and maybe it'll fill up under other conditions, too. When the bar is full, you'll gain a Level, and the bar will start over filling up. The more levels you have, the more access you get to certain things that are unreachable at the start of the game. Keep gaining Levels in order to find out what you receive in return.

The Sun, as seen in the Desert.

You'll notice that the sun moves across the screen over time, creating a day-night cycle. Different enemies will appear at night, for instance. You'll also notice that the ground is littered with rocks. Many things in Mechanic Miner are interactive in the sense that you can use your tool to mine them or dismantle them in order to harvest resources. In the beginning area, you'll first come across some Copper and Peat. You should definitely get some of those.

You start out in a marsh area, and will later progress to new lands with new resources and new enemies. At night, certain monsters roam the world, so you'll need to be prepared, by gathering materials and building things that will help you survive.

Read on to find out how to survive the first few days. 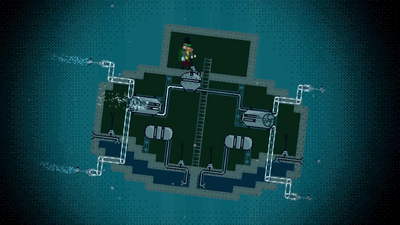 A submarine-like machine, one of the things you can build once you master the game somewhat.

Here you'll learn about mining resources, building and dismantling basic machines, how to use weapons, how to survive the night, and how to progress to new areas in the game.

Surviving the night, and building a shelter[edit | edit source]

And there you have it! You now know how to mine stuff, build stuff, and keep yourself and your stuff safe. From here on, you can explore, and experiment with different machines and vehicles. Once you level up and find some more resources, you'll get access to new tech, too. Good luck out there.