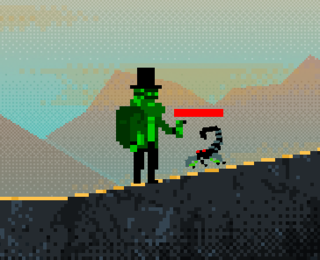 A Scorpion next to a poisoned player.

The Scorpion is a hostile Mob in Mechanic Miner.

The Scorpion can be found in the desert.

Upon killing the Scorpion you will be rewarded with some experience. In addition you'll have a chance of receiving the following upon harvesting the corpse of the Scorpion: