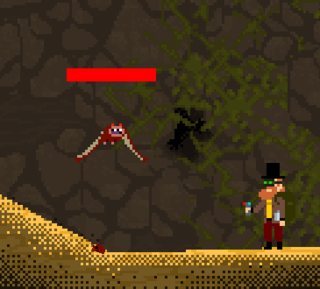 A Wrot diving in to attack the player.

The Wrot is a hostile Mob in Mechanic Miner.

Wrots can be found in caves in the desert, usually on the lower floors.

Attacking or nearing the Wrot will aggravate it, and cause it to attack you. The Wrot is fairly fast and can fly, but needs to get near you to attack. They also have an ability named 'Lift'. The Wrot will attempt to dislodge blocks and machinery, as well as all attached parts, after which the Wrot will fly away with them. This ability can be dangerous, particularly if they steal important parts such as your Weapons. If any Bats are nearby when the Wrot uses its' Lift ability, they will flock around the Wrot to defend it while it steals the parts.

Upon killing the Wrot you will be rewarded with a decent amount of experience. In addition you'll have a chance of receiving the following upon harvesting its' corpse: